“for the development of
super-resolved fluorescence microscopy”


Surpassing the limitations of the light microscope

For a long time optical microscopy was held back by a presumed limitation: that it would never obtain a better resolution than half the wavelength of light. Helped by fluorescent molecules the Nobel Laureates in Chemistry 2014 ingeniously circumvented this limitation. Their ground-breaking work has brought optical microscopy into the nanodimension.

In what has become known as nanoscopy, scientists visualize the pathways of individual molecules inside living cells. They can see how molecules create synapses between nerve cells in the brain; they can track proteins involved in Parkinson’s, Alzheimer’s and Huntington’s diseases as they aggregate; they follow individual proteins in fertilized eggs as these divide into embryos.

It was all but obvious that scientists should ever be able to study living cells in the tiniest molecular detail. In 1873, the microscopist Ernst Abbe stipulated a physical limit for the maximum resolution of traditional optical microscopy: it could never become better than 0.2 micrometres. Eric Betzig, Stefan W. Hell and William E. Moerner are awarded the Nobel Prize in Chemistry 2014 for having bypassed this limit. Due to their achievements the optical microscope can now peer into the nanoworld.

One enables the method stimulated emission depletion (STED) microscopy, developed by Stefan Hell in 2000. Two laser beams are utilized; one stimulates fluorescent molecules to glow, another cancels out all fluorescence except for that in a nanometre-sized volume. Scanning over the sample, nanometre for nanometre, yields an image with a resolution better than Abbe’s stipulated limit.

Eric Betzig and William Moerner, working separately, laid the foundation for the second method, single-molecule microscopy. The method relies upon the possibility to turn the fluorescence of individual molecules on and off. Scientists image the same area multiple times, letting just a few interspersed molecules glow each time. Superimposing these images yields a dense super-image resolved at the nanolevel. In 2006 Eric Betzig utilized this method for the first time.

Today, nanoscopy is used world-wide and new knowledge of greatest benefit to mankind is produced on a daily basis. 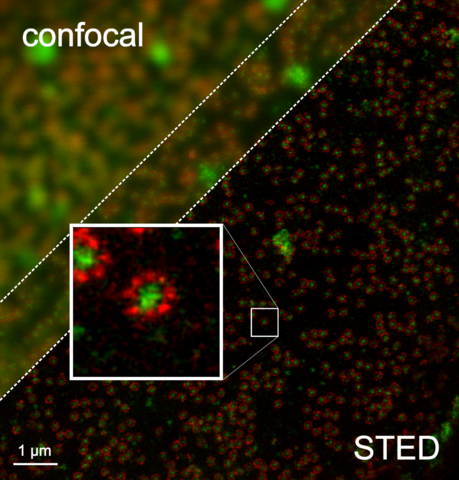 This video is a brief animation of how STED works and how it improves resolution of individual particles.

This video is a longer, more detailed presentation by one of the Nobel laureates (Hell).