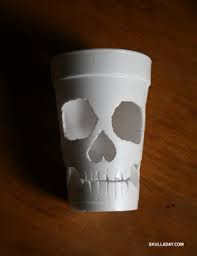 There's a crazy, wonderful blog called SKULL-A-DAY that you should visit.

The project started out when this guy named Noah Scalin made a paper skull and posted it, then kept on making skulls in various media and in different forms every day for a year.

Then folks just kept adding to it and, well, now it's a pretty big project. There's even a book version now! The book is called SKULLS

As most A&P professors are skull fans, or ought to be, I thought you might like to see all those skulls.

And maybe this'd be an interesting way to start class each day? Put the "skull of the day" on the first PowerPoint slide you use each day (or print it out and hang it up). Then maybe . . . just maybe . . . a few more students that usual will get there before class to see and discuss the new skull for the day.

And maybe . . . just maybe . . . some of them will intrigued enough to make and contribute their own image of a skull to the project! In fact, there's a contest going on right now to choose the favorite from among the original 365.25 skulls.

For Facebook users, there's an application called Send-A-Skull that allows you to send skulls to your friends. For any of you who are my Facebook friends, you probably already got one of these!

Hey, you never know what will be the thing to get an individual student more engaged in A&P! Kevin Patton
I've worked as an anatomy & physiology professor for several decades, having taught at high school, community college, and university levels. I write A&P textbooks and manuals. I am a President Emeritus of the Human Anatomy and Physiology Society (HAPS) and a founder of HAPS Institute, a continuing education program for A&P professors. I have several blogs, websites, & a podcast related to teaching and learning. And in my youth I was a wild animal trainer.

Ratings and Recommendations by outbrain