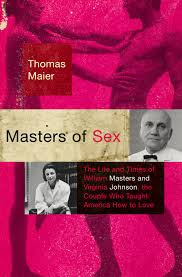 I just downloaded the new book Masters of Sex

Before I had a chance to get very far with it, I happened to tune into an interview with author Thomas Maier on our local public radio station. Now I'm even more anxious to explore this book further.

Maier does a great job of explaining and underscoring the pivotal role of William Masters and Virginia Johnson in discovering some of the basic principles of sexual anatomy and physiology.

Known to most as Masters and Johnson, in the book we come to know them as Bill and Ginny.

Most importantly, however, we more greatly appreciate their roles in pioneering the scientific study of sexual biology and developing therapies that (still) really help people. As we learn in the book, their accomplishments really were remarkable . . . and, alas, really are underappreciated.

I had the good fortune of knowing Bill Masters near the end of his life. He had just retired from the Masters and Johnson Institute when I asked him to be the keynote speaker at the 1995 Human Anatomy and Physiology Society (HAPS) Conference in St. Louis. He graciously agreed to something he had not done for years . . . and (as it turns out) never would again: speak at a scientific conference.

Wouldn't you think someone of his stature would have been a frequent speaker at such conferences? I asked him about that. It turns out that he was so vigorously harassed at scientific meetings (both by scientists in the meetings and protesters outside the meetings) that he adopted the strategy of avoiding such venues. But our meeting was different . . . we wanted to sit at the feet of the "Master" and learn about his adventures. He knew we were teachers wanting to learn and not suspicious investigators wanting to debunk.

And he did not disappoint! After showing us a film from his research program . . . a film of the "vaginal sweat" lubrication forming on the vaginal wall during the female sexual response (oh my gosh) . . . he regaled us with fascinating stories and anecdotes from a lifetime of pioneering research in the most fascinating area of human biology. 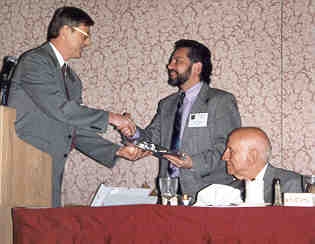 Bill and I spent many hours on the phone before and after that conference . . . he loved telling stories. His soft-spoken, self-effacing style of telling the stories seemed at odds with the honestly ground-breaking work he was describing.

All of my textbooks feature boxed essays that underscore the pioneering roles of Masters and Johnson. If you want to see why they deserve this place of honor, you'll want to read Masters of Sex.

Read about another great sex book at The A&P Professor website.

Hi Kevin,
Many thanks for the very kind words about my book.. All the best,
Thomas Maier

You're welcome, Thomas! This book will be a great resource for teachers of human biology.