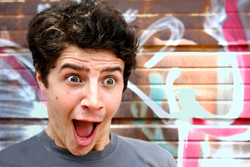 This trend in misleading "click bait" headlines among science news outlets continues to spiral into infinity. Okay, "infinity" is an exaggeration, but apparently that's what it takes these days to get us reading the actual content of science articles. And a growing phenomenon is that the articles themselves include exaggerations within their content. That's the topic of my rant, er, post today.

I've been thinking about this for a long while. I often discuss it in class with my students. Yesterday, I ran across a recent (January 2017) example of the perennial "scientists discover that the appendix has a function" headline: Your Appendix Might Serve an Important Biological Function After All

That example actually has a pretty good article about a study analyzing the evolutionary appearances and reappearances of the appendix in mammals and what that may tell us about this organ's function. But we already know enough about the functions of the vermiform appendix in humans that it's hardly true that its functions are completely unknown. The article clearly acknowledges that fact within the content, despite that attention-grabbing headline.

Another recent example was the round of excited shares on social media regarding the "discovery" that hematopoiesis (blood development) occurs in lung tissue. There were a lot of "wow, who knew?" tweets that week. Even from highly trained experts in A&P. But my Anatomy & Physiology textbook (p. 624) already has this information—and it surely cannot be the only textbook to do so.

The journal article that prompted this wave of tweets and posts described some research in mice that expands our knowledge about this phenomenon—turns out that more is going in the lungs than we thought. The lungs may be the primary site for thrombopoiesis (platelet development), if human lungs work like mice lungs. But the fact that the lungs are sites of hematopoiesis—specifically platelet formation—is not new.

I've shared these and other posts with exaggerated headlines myself—mostly on Twitter, Facebook, or my new daily newsletter from Nuzzel.

However, I think it's way to easy to succumb to the excitement of a potential "new discovery" that turns out to be not new, or even a discovery, at all. As a blogger I know full well that exaggerated headlines get more "engagement", which leads to more "followers," which leads to better "brand recognition" and thus, more future "engagement." Who wants to spend time researching and writing when nobody is reading?

But in science, maybe the public perception of how science works is better served by a more toned-down approach that recognizes what we already think we know, why we think we know it, and what any new studies can do to clarify, correct, or extend what we know.

I know that none of us individuals can stop the tide of exaggerated science news headlines. I'm just using a platform I have to express my concern that we may be making a mistake by doing so. If everything is a "breakthrough" or even a "huge breakthrough," then maybe casual observers will miss those truly game-changing ideas when they come along.

At least it's something to keep in the back our minds and we do our daily scan of science new headlines.


Your Appendix Might Serve an Important Biological Function After All


An Unexpected New Lung Function Has Been Found - They Make Blood