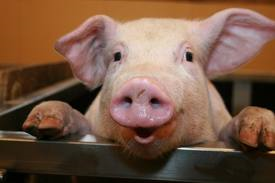 Working with pigs, a common model for human cardiovascular research, researchers first destroyed the natural pacemaker cells in each subject's heart and installed an electronic pacemaker. They then inserted a gene for transcription factor TBX18 into cardiac muscle tissue using an adenovirus.  Using adenovirous vectors for inserting genes is a common strategy in gene therapy.

Within a couple of days, ordinary myocardial fibers had developed the structure and function of pacemaker cells.  In about 5 days, the electronic pacemakers were no longer needed.

However, this biological pacemaking peaked at about 8 days, then eventually disappeared.  This may occur because the virus-infected cells are probably destroyed by the body's immune defenses.  So researchers are thinking that perhaps, at the very least, this could eventually lead to a temporary treatment for certain arrythmias in humans.


What can we use from this in teaching undergraduate A&P?